In May, I traveled to several regions of Europe including Napoli, Italy, where I had the chance to meet Flavio Borrelli again.

A high point of my time at Arcosanti was when a group of us (which included Flavio) would regularly gather behind the Workshop Dorms in the East Crescent after dinner. During that time, we had many wonderful discussions about the things and passions that brought us to Arcosanti.

Flavio and Antonio Chelen Guerra were the lead instigators on the Snake Path (or was it snake pit?). This name stuck, because it moved like a snake from the Minds Garden into the adjacent cliff which towers over the Aqua Fria River (one of the best views at Arcosanti).

The project was controversial because Antonio and Flavio did not follow what the Arcosanti leadership saw as the “proper procedures.” The pace of doing anything at Arcosanti has become very slow. Much of this was out of fear of offending Paolo Soleri or making some mistake which might make the project seem like a laughingstock. Now that Soleri has died many want to make sure we honor his will. But possibly, we can honor him without worrying too much about whether he would approve or not of what we are doing.

During my visit with Flavio, it was hard to avoid the moral and economic crisis in Italy and Europe. Unemployment is high and economic prospects are low. While unemployment is 11.5 percent among the whole society for those under 25 – its around 40 percent. A staggering number and I saw how it affected Flavio and also Simone my friend who I had visited later in Milan. Both live with their parents and job prospects for them are bleak.

Napoli was of the cities in Europe that seemed very much in a struggle with a economy that in severe downturn. Flavio expressed a concern about the state of the economy and lack of opportunity in Southern Europe. While no one would or does really say these countries are in depression, its safe to say that its the worst economic conditions they have faced since WW2 and people are pretty overwhelmed and depressed about the situation.

Yet I saw a glimmer of hope in Flavio’s work. It made me consider the possibility that our creativity and ability to innovate is the real solution to these kinds of economic depressions and the general morass that faces humanity now.

For what is happening in Italy and Southern Europe may well be part of a larger contagion of the human spirit that will eventually spread and infect all of humanity. How we deal with this loss of faith in modern institutions will determine our destiny as a species. Its really a reflection of the loss of purpose, passion and deep drive in the modern world and its belief system. I believe our creative ability to innovate and adapt to challenging situations is the real solution to these kinds of economic depressions not praying for more economic growth and jobs from the power brokers of the global economy. 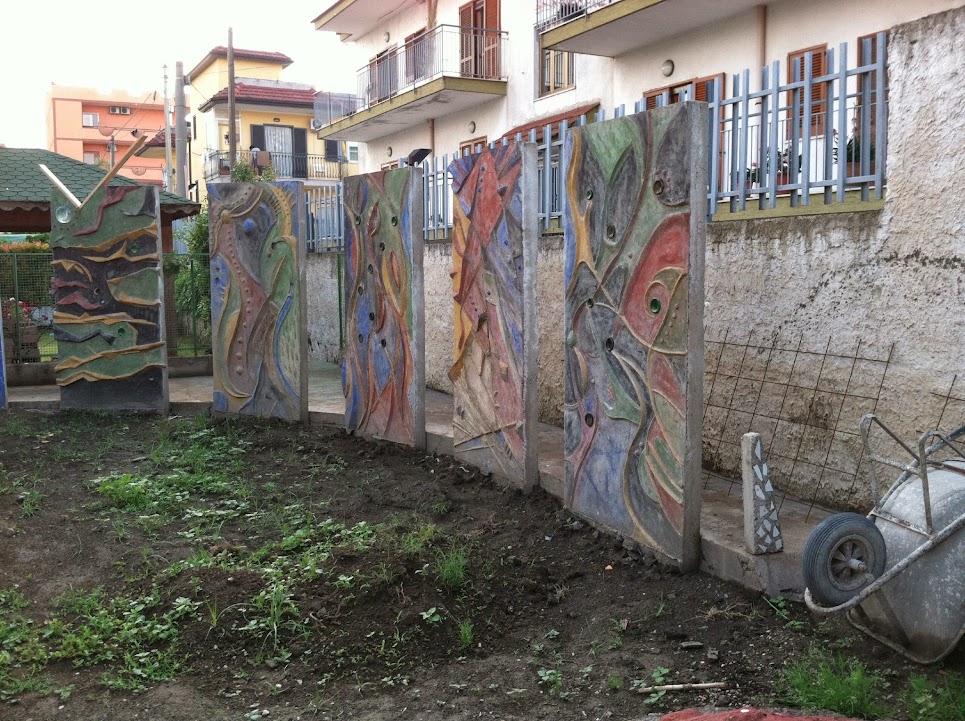 The pictures here are from the backyard of his Uncle’s house which he is helping to remodel.

One of things that Flavio is doing is refining and developing his own take on Paolo Soleri’s silt casting technique that he learned at Arcosanti. 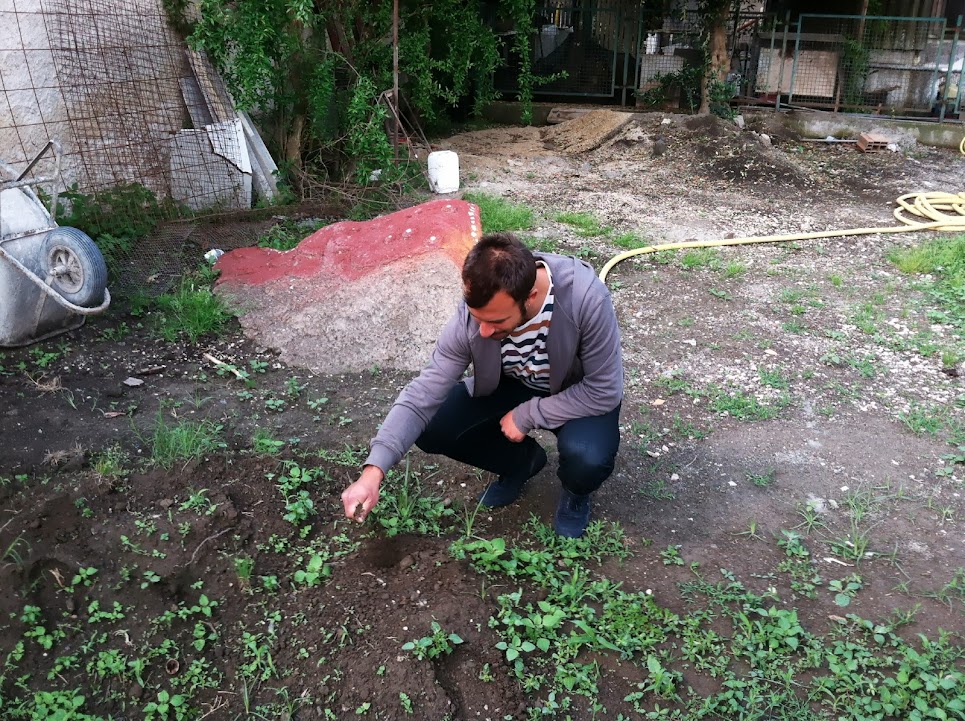 Flavio spoke to me about how he applied and modified this technique. He showed me the material he used and it looked like soil – it was black in color and very different in appearance in the silt I had used at Arcosanti. Silt of course can come in different colors other than the familiar “Southwest Adobe Brick Red” I was familiar with. According to the WikiPedia page on Silt:

silt particles range between 0.0039 to 0.0625 mm, larger than clay but smaller than sand particles.

The “silt” is placed around the form which is made of wood and then once the desire design is in place, color can be added in the form of powdery pigment. Sometimes the pigment is mixed with water to form many different colors. 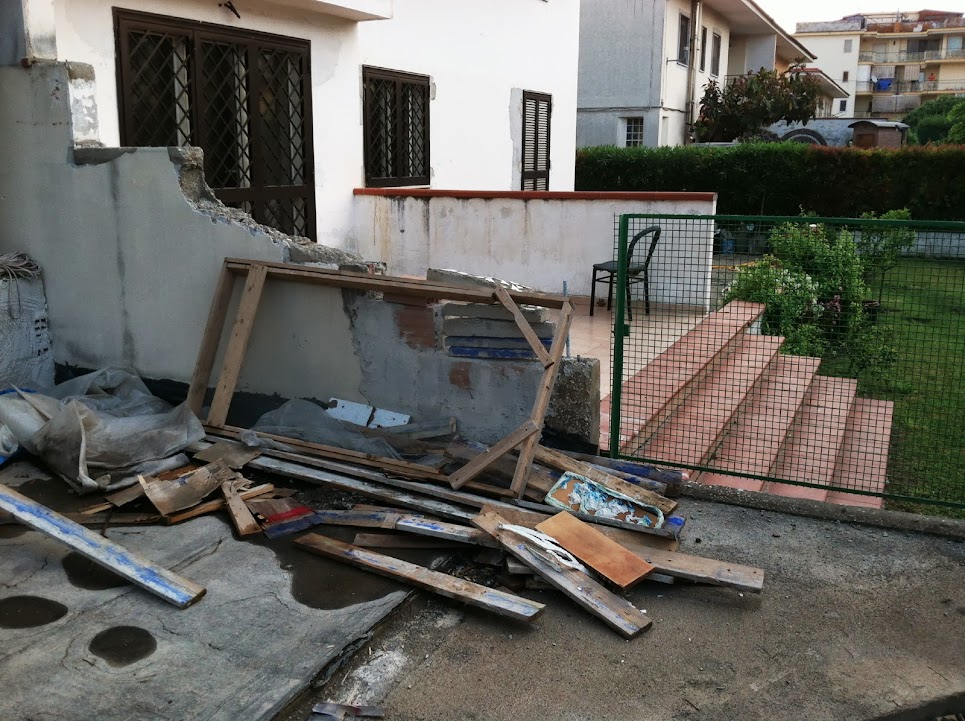 In 1984, Paolo Soleri published a book with longtime associate and Arcosanti resident Scott M Davis called Earth Casting that explains his silt casting technique in great detail. Silt is used as a molding material that adds a natural element to concrete. To do an Earth Cast the first step is to get the silt and make sure it is the desired consistency. There are many difference ways of adding to silt to concrete. Usually you will add  the silt between the form and where the concrete or plaster is to be poured. Once the desired design is in place, color can be added to the silt by using pigment. The pigments are bought in several base colors as powders. Water is added to the powder to make the pigment so it can be painted onto the silt. Once the water is added to make a liquid, the base or primary colors can be mixed together to get the desired color. Then the pigment is applied to the silt with a brush and allowed to dry. After its dry, a slurry coat can be added to protect the silt cast, during the concrete pour. The concrete pouring concrete should be conscious of the delicacy of the silt cast, because at Arcosanti there are examples of where the silt cast was damaged giving a permanent impression on he ceiling of the crushing of the silt cast. Usually after the pour, we will wait about two weeks until the concrete is strong enough and then remove the form work and see how well the silt cast fared.

What we can see with Flavio’s work is not only the notable talent and creativity, but also a willingness to be creative and different. The panel’s takes Soleri’s concept of creating colorful and abstract panels made with silt to new levels by introducing a whole new style to the technique that has been rarely copied in an artistically compelling way. 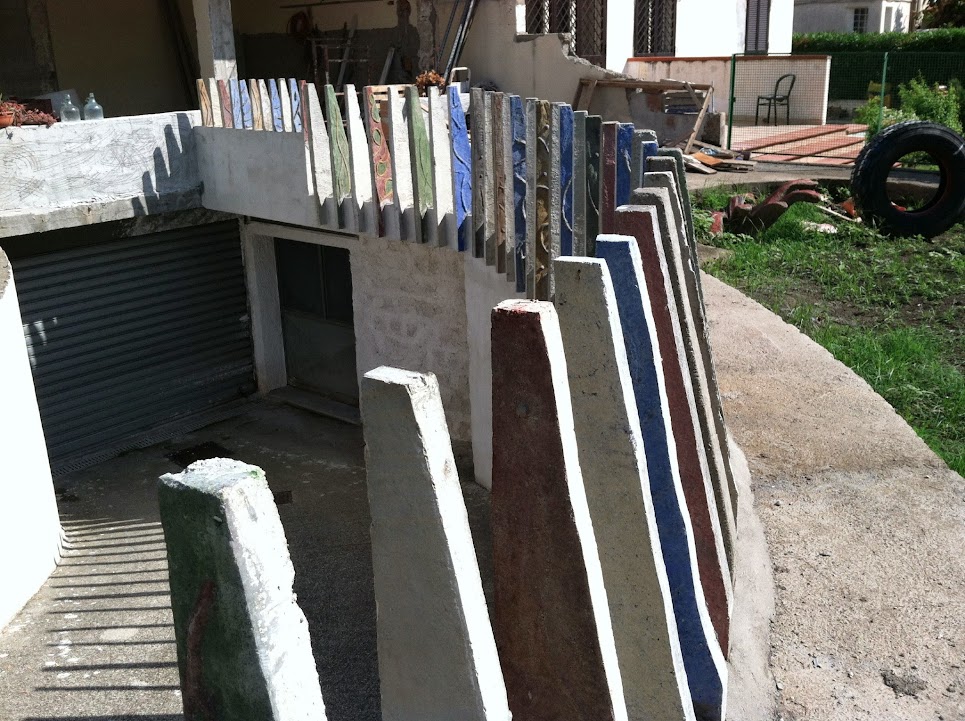 The challenge Arcosanti itself faces as it considers its future without its founder and primary driver for all of its history up to now, is how to both honor Soleri (without becoming a museum) and to encourage a culture that embraces (rather than stifles and discouraging it) the creative talent of people like Flavio Borrell and Antonio Chelen to create a new story for Arcosanti in the “Post-Soleri Era.”

May we who are inspired by the work and life of Paolo Soleri, consider such efforts as inspirations in our lives to build a reality of creative work that builds on the legacy of Paolo Soleri.

If we think big and work relentlessly to create the physical and practical reality of that creation, we may indeed be humbled by the possibility of our creation and how that propels us to greatness.

You can see more images of Flavio’s work here